Farm tours are integral to Ei work on many levels. From a soil health perspective, farms may be harmful or extraordinarily beneficial to restoring carbon cycle balance. Ei focuses on the many success stories where farms restore broken soil systems through regenerative agriculture.

From a food-waste focus, farm tours reveal sustainable practices in retail and consumer packaging used within the food supply chain. Similar to a manufacturing plant tour, Ei observes the materials management practices in place to ensure minimal waste is generated during operations and packaging for consumer purchase. 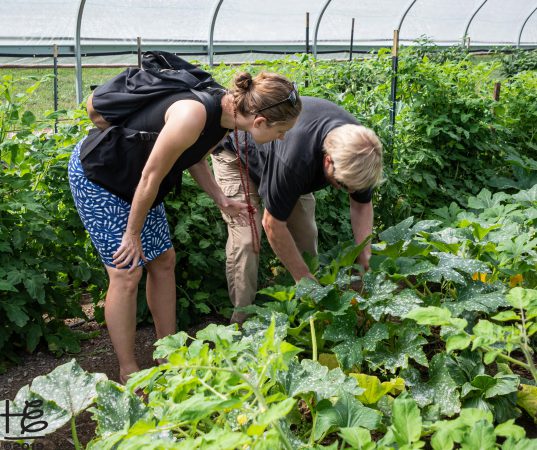 Searching for a male squash bloom

For Ei Founder Holly Elmore the tour was an opportunity to witness the farm’s evolution since KSU announced the closing of the Michael A. Leven School of Culinary Sustainability & Hospitality.

The RiA Magazine article, Success is not static: evolution is required to create and sustain regeneration, gives an overview of the empowering farm tour.

The Greenville urban farm tours are chronicled in the RiA Magazine article, Greenville, #yeahthatgreenville, is a southern treasure; the Holly Elmore Images FB album, Greenville, SC, is a pictorial recount of Holly’s May Greenville visit with sections on the farm tours.

Scott and Holly use CompostNow’s residential food-waste collections services at their respective homes. It was nice to see the food waste’s destination.

Photos from the impressive farm and composting site tour are included in the Ei FB album, Ei Connects.

On October 16, 2018, Ei hosted the first Ei Exploration. A group of diverse, passionate industry leaders traveled from California, Georgia, North Carolina, and South Carolina to participate in the Ei Exploration of Fungi, Soil Health, and World Hunger in Upstate South Carolina. The empowering day was in partnership with Ei Strategic Ally Feed & Seed.

Ei Explorations bring industry leaders and experts together to strategize on solutions for challenges facing humanity and life on our planet.

Photos from the impressive farm and composting site tour are included in the Ei FB album, Ei Connects.

The ZWA Blog article, The Power of Tours, features the King of Crops Farm tour. Photos from the impressive farm and composting site tour are included in the Ei FB album, Ei Connects.

On a deeper level, the tour educated Valerie, Kim and Holly on the urban agriculture systems in-place, their connectivity (or lack thereof), the far-reaching implications of urban farms beyond providing fresh, seasonal produce to impoverished neighborhoods, and the valuable role compost plays on the farms.

On the surface the urban agriculture tours were a fun day spent with new and long-time friends. Yet the undercurrent of imperative action was strong and it was thrilling to realize urban agriculture’s vital role on fronts beyond food security and community engagement.

In May 2012 a group of Ei Partners and friends traveled to South Georgia for farm tours. Learning the farm’s practices and assessing the current scenario for protein-transport packaging were the catalysts for the trip. Ei chose family-run farms committed to sustainability and animal welfare at the core of their ethics and operations.

For a pictorial recap of the farm tours, see the Ei FB albums, 05-14-12 White Oak Pastures Tour, and 05-15-12 Thompson Farms Tour. WARNING: Some Thompson Farms photos are graphic yet honor the process and the livestock who gave their lives to fulfill consumer demand for animal protein.